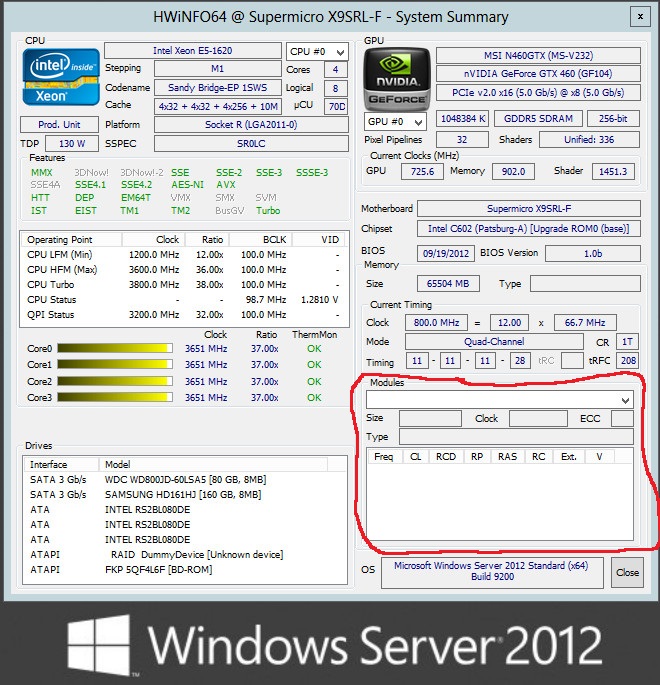 Staff member
There seems to be a conflict while HWiNFO tries to access the DIMM modules, so it can't read the information.
Are you maybe using some other system monitoring or management tool in parallel ? If yes, please try to disable it before running HWiNFO if that helps.

Martin said:
Are you maybe using some other system monitoring or management tool in parallel ? If yes, please try to disable it before running HWiNFO if that helps.
Click to expand...

NOP! There wasn't monitoring or management tool in parallel. I even reinstalled OS to double check. Fresh install. THE SAME. DIMM info is missing.

Maybe that important. but before i reinstalled os, i tried to launch hwinfo64 summary multiple times in row and 1x in module drop down list appeared several scrambled chars or symbols.

Staff member
Please check in the BIOS if there's maybe an option like DIMM Temperature or TSOD polling. If there's something like that, try to disable it and check if that maybe helps. Please let me know the result.

Nothing suspicious in BIOS. Here is my bios menu and all sensor info in attachment.

Staff member
Thanks for the additional information.
I see 2 entries in the Memory Configuration screen: "DRAM RAPL MODE" and "Thermal Throttling". Can you please try to change these and see if it has any effect on this problem in HWiNFO ? I'm not pursuing this as a solution, it's just to prove if my theory is correct.

Thanks a lot Martin!

Staff member
Thanks for the feedback. I just wanted to know whether TSOD polling is the cause of this problem and it indeed is.
Now I need to find a solution how to get SPD info working together with active TSOD polling.
Will post an update here shortly when I have s solution that needs testing...

Staff member
Please enable Thermal Throttling back and try this build:
www.hwinfo.com/beta/hw64_411_1830.zip
if it works now. If it doesn't, then please attach a new Debug File.

Staff member
Thanks for the feedback. It's not easy to get around that issue.
Please try this build: www.hwinfo.com/beta/hw64_411_1832.zip
and let me know the results.

the same. No dimm info.

Staff member
Thanks. It seems all my attempts to temporary disable CLTT (which causes TSOD polling that interfers with DIMM SPD readout) fail and are overriden back by system...
Please try this build: www.hwinfo.com/beta/hw64_411_1833.zip
and post a new debug file result.

Staff member
Thanks for the update.
Here's one more attempt - www.hwinfo.com/beta/hw64_411_1834.zip
Note that this build might cause HWiNFO to lockup. If that happens, wait a while, then try to close it via Task Manager.
Please attach a new debug file.

Staff member
Then I'm sorry, but it seems the system doesn't allow me to switch TSOD polling off. I try that but it seems it's locked into this mode and that doesn't allow to read DIMM information. I'll make some more research, but currently the only workaround for this problem is to disable CLTT in BIOS.
If I find another way, I'll post an update here.
Thanks for all your feedback and testing.

Staff member
Update:
I have just tested a different Supermicro machine (X9DR6-F) which has CLTT enabled in BIOS too. HWiNFO had no problems to read SPD there.
The difference I found is that on the other machine HWiNFO was able to temporary disable TSOD polling (until DIMM SPD is read out), whereas on your machine the TSOD polling mode somehow can't be disabled and it causes HWiNFO to fail to read DIMM SPD information.
My understanding is that there might be a BIOS implementation difference (either somehow locking that mode, or constantly forcing it to be enabled).
Maybe a BIOS update might fix this ?
You must log in or register to reply here.
Share:
Facebook Twitter Reddit Pinterest Tumblr WhatsApp Email Share Link
Top