Not sure if I am reading this right, could use some help.

I replaced the stock cooler on my FX8350, do to noise. The stock cooler is really loud. Anyways, my new cooler is super quiet. My case has airflow great enough that it's not even an issue. I have been occasionally opening Speedfan the last couple weeks during gaming sessions to monitor the CPU temp. It had the core at the 80 degree mark. So I grabbed HWmonitor and I could never figure out the tmpin things. Googling which tmpin measured what always seemed to link me to forums where people had different opinions on what measured what. Anyways, I just found HWinfo. I booted it up, sensors only because I am only interested in the temp of my cpu, to make sure the new cooler is doing its job since it's so damn quiet. Here is a screen cap with my CPU during a video render (maxed out, 99% usage according to Task manager): 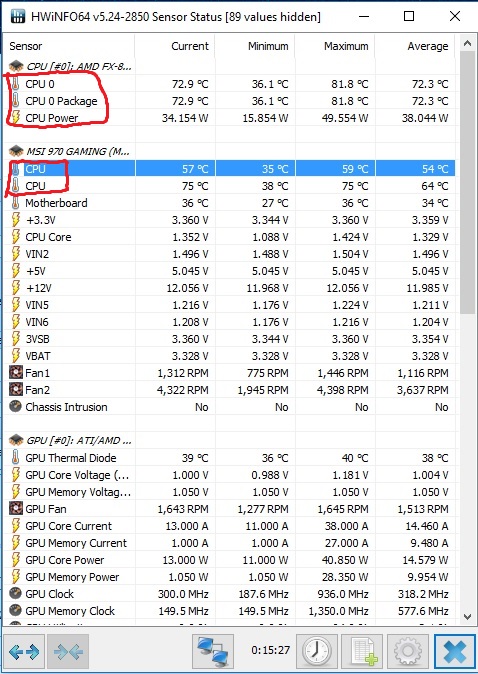 I want to make sure that I am reading this right, is the first CPU under the Motherboard the Core? The Socket? IDK. Since it's under the 62 Celsius AMD recommendation, I am assuming that it is the temp to watch but I am not sure. My games and programs do not seem to suffer in the slightest, so it doesn't feel like i'm getting bottle-necked from high temps, but I just don't know.

When I check my temp in bios, it is very quick to reset to an idle 32-35 Celsius. I have read that most monitoring software is off, even this one from these very forums, but I'd like to actually understand the temps I am looking at, rather than just guessing.

Staff member
You're right, it's confusing. And even more because recent AMD CPUs have a flaw in temperature monitoring as already described here: https://www.hwinfo.com/forum/threads/cpu-core-temperature-measuring-facts-fictions.148/
But for your mainboard I believe the correct CPU temperature is the 2nd one under the mainboard sensor, so 75 C. Also the temperatures under the CPU sensor might be quite close to real numbers because they are in the higher range. The problem with AMD CPU temperatures occur mostly in the lower range.
You must log in or register to reply here.
Share:
Facebook Twitter Reddit Pinterest Tumblr WhatsApp Email Share Link
Top