Picture will explain everything easily:

As you can see, almost all sensors are doubled up. Also, Maximum values are showing some weird values that go into thousands. This happens pretty much every day.
Using hwinfo64 v6.40-4330

Staff member
Are you perhaps using some other monitoring tool along with HWiNFO?
Try the latest Beta build v6.41 and do a full "Reset Preferences" or "Restore Original Order" in sensor settings.
Last edited: Jan 10, 2021
P

Martin said:
Are you perhaps using some other monitoring tool along with HWiNFO?
Click to expand...

I'm running Afterbuner + RTSS for overlay but it happens within 1-2 minutes even when those 2 are not running. Tested that.

I did a full "Reset Preferences" or "Restore Original Order" and it's still happening. But it now looks like this:

The number of rows in the bottom Renesas varies, but the bottom one always shows weird values.

Staff member
This doubling is expected as that represents 2 VRM loops. It's just that the second one doesn't seem to be utilized.
Bigger problem were the erratic Maximum values, but since you didn't post these on the screenshot I don't know whether this is still a problem.
P

Martin said:
Bigger problem were the erratic Maximum values, but since you didn't post these on the screenshot I don't know whether this is still a problem.
Click to expand...

Yes, weird Maximum values are still a thing. Both on Beta v6.41-4345 and on Stable v6.40. Freshly booted system today and after a few minutes Maximums are showing this:

Sorry for not including Maximums earlier. After restoring the original layout order yesterday I tried to resize the window to fit my screen and it got cut off.


EDIT: Just got to think about it. Would Overclocking affect the issues with readings somehow? My system IS overclocked. Stuff like VRM Switching Frequency is increased from stock value in BIOS. And since we are reading from the VRM Controller? Despite the Oveclock my system has been tested over multiple nights with MemTestPro, Karhu, AIDA FPU, AIDA Cache with no errors and no Whea errors whatsoever so I dont think this has any effect since I have hundreds of hours of gaming spent on it without issues.

EDIT2: After some time eveyrything is showing weird maximums: 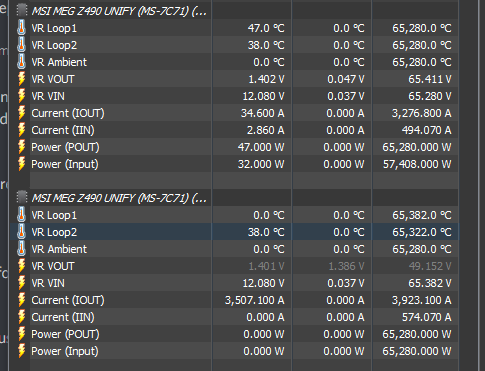 Staff member
I don't think this is caused by overclocking, but you can if running at stock settings will change something here.
It's rather an issue of unreliable communication with the VRM because in this case it's connected different than on other mainboards.
Unfortunately, currently I don't know how to fix this, as the documentation is very vague and insufficient.
You must log in or register to reply here.
Share:
Facebook Twitter Reddit Pinterest Tumblr WhatsApp Email Share Link
Top