Bug with HWiNFO64 in RTSS OSD.

Just did an OS reformat and installed HWiNFO64 4.26. There's now a bug with the HWiNFO64 readings in RTSS OSD. It wasn't present when I was using 4.20 previously so I'm not sure when it was introduced. 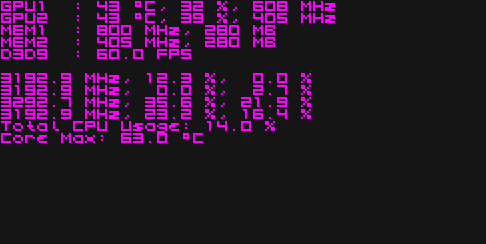 In each screenshot, top half is from MSI Afterburner and bottom half is from HWiNFO64. As you can see, the first four lines used to line up perfectly on the edge of the screen but now there is a colon ( : ) and blank space before each line. Call me OCD, but I think it looks really ugly.

It's only an issue with unlabeled lines, the two labeled lines at the bottom line up at the edge of the screen just fine. But I want it to look the way it did before.

Staff member
Thanks for the report. I'll fix this in the next build released

OK great. Thanks for the quick response!

Staff member
This should be fixed in the new v4.27-2040 Beta released a while ago.
Please let me know if it's OK now.

Yes it's fixed in the Beta build.

Any ETA on when the next Stable or installer build that includes this fix will be released?

Staff member
You can use the latest Beta, it's fully functional.
The next 'stable' release will be available in the next 1-2 weeks depending on progress.

Thanks for the info.