[font=Arial, Verdana, Helvetica, sans-serif]Everything is working fine except "GPU CLOCK" speed is struck at 598.xx mhz , It's base clock is 350mhz and supposed to go upto 1.15ghz.  Is everything alright ? My intuition tells me that Drivers are not working properly or HWinfo might be ill reporting it!
[/font] 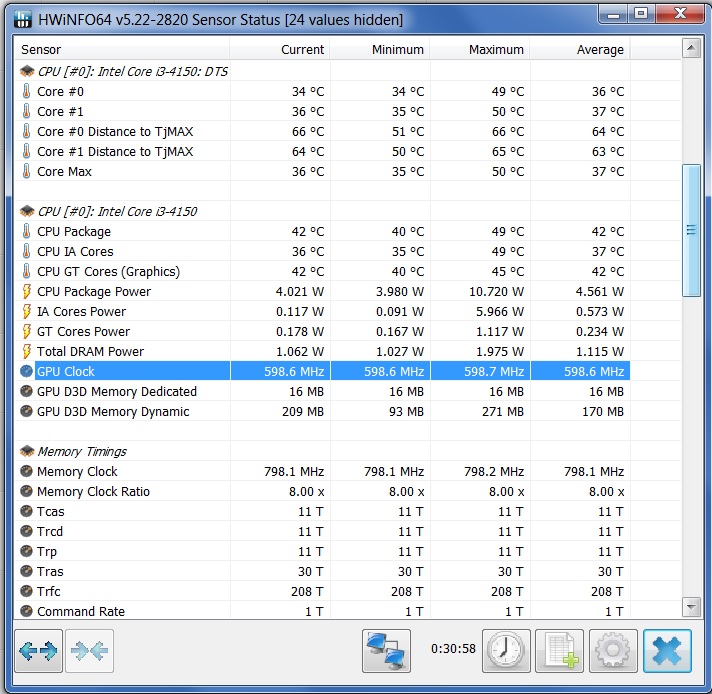 Update: I did Google search by replacing the keyword "598mhz" with "600mhz" (Intel HD 4400 stuck at 600mhz) , surprisingly some people were having the exact same problem as me! So i ran stress test via Intel XTU as suggested in some post on internet, It did boost my GPU CLOCK to 1.149ghz which means the online game i'm playing is not as demanding.

As for GPU frequency not going down to 350mhz has somthing to do with drivers, it is not using much energy so i'll not worry about it.

GPU clock have different value for any performance mode. For example NVIDIA GK107 have clock table 2D minimal 324 MHz, 2D Performance 1072 MHz and if needed can overclocking up +10% - 20% if the heating of the crystal does not exceed the permissible. So what you see is the normal behavior of a modern GPU - when the minimum load it reduces its operating frequency and supply voltage reduces heat generation and improves them if necessary within the allowable values TDP.
You must log in or register to reply here.
Share:
Facebook Twitter Reddit Pinterest Tumblr WhatsApp Email Share Link
Top