Hi, I installed HWinfo64 to check everything, USAGE/TEMP... And I noticed something about my SSD :

I do not understand because everything is ok in the S.M.A.R.T category. Everything is ok on CrystalDisk +Kingston SSD Manager. I have this line only for my ssd. 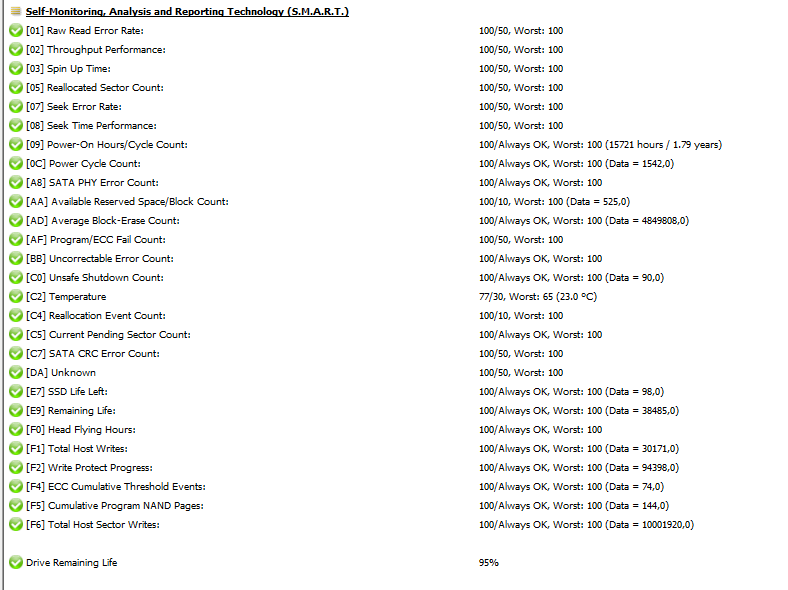 This is my manufacturer software, nothing about "ATA Device Statistics information"
smartmontools use the smart technology ? But u talk about ATA Statistics, i don't understand sorry.

this is the same value in my manufacturer software :

try to format data once again from SSD
K

I finally have registered on this forum, intentionally and primarily for this thread to express the same problem ONLY with HwInfo64 having the same Kingston-branded (HyperX 240 GB) SSD with similar model. I didn't want to start a new thread as this one covers my problem nicely.

I got my SSD as used from my friend and he said that he has used it normally without any abnormal incidents. Since I got it, I got no major crashes, BSODs or file integrity failures and can confim it seems to work normally, too.

However, as CrystalDiskInfo and many other (including Kingston Toolbox stated in first post) programs claim that my SSD is fine and its remaining life is even still %100 despite having some "aged" bad blocks which is normal.

But after I run HwInfo64, I noticed the following warning about "Number of Reported Uncorrectable Errors" on drive properties which I highlighted inside red rectangle on the screenshots attached, and I can confirm that this value keeps increasing.

However as you can see, this drive has about 45 TB Total NAND Writes and about 21 TB Host Writes which means about 2.15 Write Amplication and it is fine, too. I started to see that this value keeps increasing when I launch Hwinfo64, which is suspicious too.

Should I still surrender and worry?

@Martin kindly had contacted me via his e-mail to tell about the issue which is a Standard ATA value which should be reported correctly. But this value is reported ONLY by HwInfo64 among all the other tools I tried ever.

Hope to see an relaxing and satisfying explaination further.

Martin said:
This value is reported via ATA Drive Statistics standard, which is a different interface than usual SMART. AFAIK only very few other tools support this standard and CrystalDiskInfo is not among them. So that's why you don't see it reported anywhere else. Drive Statistics is a fully standardized feature and should report correct information, unlike SMART which is only partially standardized (attribute values have never been fully standardized).
Click to expand...

Thanks Martin for the reply. So, should I worry and should I consider for drive replacement?

I got your point as it is a standardized value, but I'm still surprised and I don't get why SMART table's BB (187) "Reported Uncorrectable Errors" field is ZERO?

Is it a Kingston-specific problem like in the first post which is also Kingston's another drive model?

I asked my two friends who both have SATA 3 and Nvme SSD drives with different brands, they don't have such field in there at all with HwInfo64, it's weird, too.

Staff member
I cannot give you a guaranteed answer as reporting of this value depends on drive's firmware and it's indeed strange that it's not reflected in SMART.
I'd be cautious with the drive, perform regular backups and watch how the value grows over time.
You must log in or register to reply here.
Share:
Facebook Twitter Reddit Pinterest Tumblr WhatsApp Email Share Link
Top